ABS-CBN UNVEILS THE FIRST DTT SERVICE IN THE PHILIPPINES! 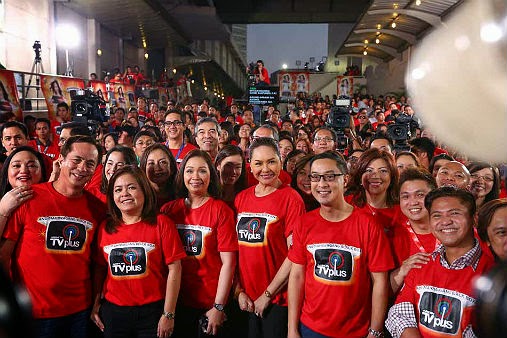 MANILA – ABS-CBN ushered in a new era in Philippine television with the launch of its new digital service on Wednesday.

ABS-CBN TVplus, popularly known as “The Mahiwagang Black Box,” was unveiled by executives of the media conglomerate led by its chairman Eugenio “Gabby” Lopez III, and president and chief executive Charo Santos-Concio in a ceremonial switch-on event held inside the ABS-CBN compound in Quezon City.

Lopez said digital terrestrial TV (DTT) is a major investment of ABS-CBN, calling it “the future of TV” and “the biggest innovation on free TV today.”

“Today, the dream of digital TV becomes a reality,” the ABS-CBN chairman said in his speech.

"We are here now because we believe in the potential of the Filipino. Thank you for joining us as we begin the transition from analog to digital television," he added.

“ABS-CBN will be the pioneer of the biggest innovation in television. We mark a new milestone in the history of TV,” said Katigbak.

The digital box will also pick up free-to-air channels that offer digital services, including ABS-CBN and ABS-CBN Sports +Action.

ABS-CBN DTT head Chinky Alcedo said other networks outside of the ABS-CBN Group can also be received by the box, but only if these networks are offering digital services.

“Our Mahiwagang Black Box can pick up the transmission of all free-to-air channels broadcasting digitally, so if they configure something that will disallow them to be received by our box, hindi ko masasagot ‘yan,” she told ABS-CBNnews.com when asked if other networks may choose not to transmit to ABS-CBN's TVplus.

“The IRR states that all digitally transmitted free-to-air channels should be received, so we are fully compliant,” she added.

According to ABS-CBN Group chief financial officer Ron Valdueza, ABS-CBN is investing around P600 million this year to expand the service in Iloilo, Bacolod, Cagayan de Oro and Davao.

He said the firm is projecting to sell 1 million units of TVplus this year.

Each unit is offered at a one-time payment price of P2,500 with no monthly and installation fees. The unit also comes with an ABS-CBNmobile SIM card with prepaid credits worth P50.

Valdueza said the better picture in areas where ABS-CBN’s signal needs improvement is expected to have a positive impact on the network’s ratings, which may lead to improved revenues from advertisements.

“If there is improvement in ratings, hopefully it will translate into higher advertising revenues,” he said.

Katigbak, meanwhile, said the firm will be studying the market’s response to the retail price.

“The product, I can say with certainty, the market really accepts. They really see a lot of value in the product, whether we can sell it at the current price is something we will find out in the next couple of weeks,” he said.

Those who wish to order the digital box may send an SMS to 23661, or call the hotlines 488-8888 in Metro Manila or 1-800-10488-8888 outside Metro Manila. The boxes will be delivered free of charge in areas covered by frequency availability.